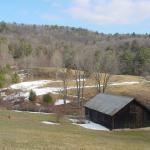 John Payne of Foxbard Farm owns a total of 717 acres in three parcels: 285 acres around his home/ barn; 292 acre woodlot elsewhere in town not connected; 140 acres [90 acres woods, 50 acres hay, elsewhere in town]. He also leases 170 acres of land - 95 acres of which is the subject of this case.

The Smith Farm is one of the original farms in Shelburne. Over time through succeeding generations, parts of it were sold off, primarily as house lots. In 1999, the family put 95 acres on the market , in one 70-acre piece, and three 8-acre house lots.The owner called John Payne first, before it was put on the market, to see if he, as an abutter, was interested in buying it. The property was in Massachusetts Chapter 61A [current use property tax program, affording agriculture and forest land property tax relief]. One important and relatively unique provision of the Massachusetts current use tax program is that the community has the right-of-first-refusal to purchase the land at the price offered by a willing buyer. Communities have 120 days within which they can exercise this right. The proposed sale of the land would remove it from Chapter 61, hence the community needed to decide if it would exercise its right of first refusal.

Neighbors of the property wanted the town to exercise its right. The Franklin Land Trust which is active in the area wanted to participate. In a non-binding special town meeting decision, citizens voted to pass the right-of-first-refusal on to the Franklin Land Trust (FLT). The Selectboard took this "sense of the town", and passed the right to FLT, which initiated a campaign to raise the money to buy the land at the asking price. The fundraising was local, with interest expressed by neighbors and other supporters in town. The "puzzle pieces all fell into place" with fundraising, which was accomplished by a relatively small number of generous citizens weighing in with contributions to FLT to underwrite the purchase of the land. The fundraising had to be done on a tight time schedule, since the town only had 120 days to act, before the right-of-first-refusal expired, and the sale went through as originally intended. They raised roughly $300,000. Much credit goes to Mark Zenick of the FLT.

Mark Zenick and FLT played an invaluable role in the project. Zenick was the "architect" , in that he had extensive experience brokering similar deals between sellers and conservation buyers, and had good insight into how to raise funds, structure the deal, negotiate with potential donors, and make the case. Zenick served as the sounding board and creative force behind the deal, and John Payne was the "skeptic" who challenged the project in a constructive way by asking questions.

During the fundraising campaign and negotiations, FLT director Mark Zenick approached John Payne with an offer of a long-term lease and care of the land. FLT saw its mission as accomplished, since the land had been protected from development, but it did not want to be in the business of managing the land. John Payne signed a 99-year lease to the 95 acres owned in fee by FLT. John pays $500/year to FLT, as well as $200/year to the town in a payment in lieu of taxes, since the property is owned by a non-profit and technically could be considered off the tax roles. John Payne manages and improves the land as part of his overall farm operation. He has had an 8-acre pasture cleared of scrub pine and brush, and has reseeded a small hay field to clover and other forage grasses. The wooded portion of the property had been harvested partially by the previous owner, and will need appropriate silvicultural treatment to improve the timber for the future. He manages the land "as if it were his own", and does not pay the FLT for timber or other products that are harvested. It is understood that these are all covered by the annual lease payment. The provisions of the lease are that agricultural and forest management are acceptable practices or uses of the land, but no major alterations are permitted, such as sale of stone walls or gravel excavation. Due to increased hay and pasture land, John is able to increase his herd by 12 to 18 more head, and the woodland will contribute important periodic income to the operation.

John's father grew up in Greenfield. He bought the farm in 1943 from two elderly brothers who retained life tenancy after the sale. John's father retired to the farm in 1971 to run it. John returned to live permanently on the farm in 1998. John has a brother who lives out-of-state and visits periodically, and as an avid birder loves the farm for different reasons.