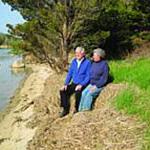 Eleanor Rogers owned 10 acres on Little Pleasant Bay in the Cape Cod town of Orleans and planned to leave the property to her son, daughter, and four grandchildren.

The family loved walking the land as well as kayaking in the bay. Her daughter Ellie Johnson was interested in conserving the property and had some exposure to land conservation from her involvement with a campaign to prevent development on Mount Holyoke in western Massachusetts, so she knew to get in touch with a local land trust. On the land trust’s recommendation, the family had the land appraised by a qualified independent appraiser to find out the value of the land.

Although the family knew that waterfront land on the Cape was valuable, they were still stunned when they saw the land’s appraised value and the fact that eight houses could be built on the land. Because of the high land value, the taxes that would come with the transfer of land to the heirs would also be extremely high. In addition, the property taxes for the land continued to increase every year and were becoming a financial burden.

The family decided to have a meeting to talk about the future of the land. They walked the property and came to the conclusion that their land could better serve the bay, the town, and their family if left in its natural state.

Around this time, the family was closing out their interest in a family business, which carried some significant capital gains taxes to deal with. After consultation with the land trust, the family attorney, and an accountant, the family came up with a solution that met their goals. They decided to donate a conservation restriction (CR) on the majority of the land, except for one house lot to the Orleans Conservation Trust. The CR reduced the amount in estate taxes resulting from the inheritance of the land, and the family was able to use the CR donation as a charitable gift to offset all of the capital gains taxes they would have had to pay for closing out their interest in the family business. Also, the property taxes for the land in the CR were reduced by 90 percent.

Two things surprised the family after conserving the land. First, the property taxes on the one house lot they retained without a CR went up. Since this house lot was adjacent to conservation land, it now had even greater value. The second surprise was an investigation by the IRS, which initially questioned the value of the CR donation.

However, since the family had worked closely with their professional estate planning “team” led by Mark Robinson of The Compact of Cape Cod Conservation Trusts and followed their advice – using a qualified independent appraiser and clearly documenting the public benefits of the charitable gift of the CR – the IRS inquiry was resolved without incident.

In the words of Peter Johnson, Ellie’s husband, “We are very appreciative of Mark Robinson’s careful stewardship in guiding our family through this journey. We now have this beautiful piece of property that we continue to enjoy. Conserving the land was a nice coming together of the family. We are so happy that, with all the fun we’ve had on the land as a family, it will be passed on to future generations. It feels good that we not only prevented the degradation of the bay’s water quality, we actually helped in our small way to protect the Cape’s environment. When we are out kayaking, I love looking back and seeing the green trees on our land standing out among the surrounding houses.”