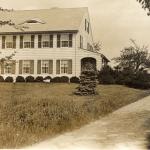 Surrounded by 107 acres of woodland and meadow, Carey and Donald Prouty made their home for nearly 50 years at Donald’s ancestral home in Littleton, Massachusetts. This land, purchased by the family in 1917, became home to four generations of the Prouty family. Carey and Donald shared this land with Donald’s brother Roger and also the people of Littleton, with trails for hiking and horseback riding and access to neighboring Long Pond. Located only minutes from 495, this land is one of the largest open tracts of land remaining in the heavily developed region surrounding Boston. When Donald Prouty passed away in 2002 his family and community mourned his loss, and faced the question of what would become of this beloved tract of land. How to maintain its natural beauty and integrity? How to continue the vision for it that Donald and his family had held for so long? An answer was found that involved the efforts of many individuals, including the Prouty family, the New England Forestry Foundation and the entire community of Littleton. This answer was the creation of the Prouty Woods Community Forest.

After the loss of her husband Donald, Carey Prouty and her brother-in-law Roger took stock of the property they jointly owned. In addition to the 107 acres of land, the property had a large farm house with two barns and outbuildings that had been built by Roger and Donald’s family. There was also a summer cottage, the Wilderness House, which had been Carey and Donald’s first home on the land, winterized for them to live in with their daughters after World War II. This had been a challenge for Donald and Carey to take care of together, and now, with the children grown and having moved away, it would be impossible for Carey to manage on her own. Carey and Roger engaged LandVest Inc., a real estate consulting firm with expertise in conservation planning and timber management, to look for a possible buyer for the land. The size of the property made it an extremely attractive parcel to commercial developers. Located at the intersection of routes 2 and 495 in Littleton, it is situated only a short commute from Boston, an ideal site to break into small parcels for new homes. Roger and Carey received several such offers, but realized that if accepted they would irrevocably change the nature of land. The Prouty family had managed their property for timber and recreation, and enjoyed the quiet of the forests and fields. They did not want to have the sale of this land mean the loss of all they had loved. A novel solution needed to be found in order to keep this parcel intact despite the lucrative incentives existing for them to sell it for development.

NEFF and the Prouty Land

Dick Perkins of LandVest found just such a solution. Early on after he had been engaged as a broker for the Proutys, he heard that the New England Forestry Foundation (NEFF) was searching for a location for its headquarters. NEFF is a non-profit organization, founded in 1944, that has as its mission the promulgation of sustainable forestry in partnership with private forest land owners. NEFF owns over 22,000 acres of land in 125 Foundation Forests and holds conservation easements, which preserve land as open space, on nearly 24,000 acres in New England. NEFF seemed the ideal candidate to take on the stewardship the Proutys’ land. The many buildings of the Prouty property could be used for offices and the land itself could be used as a model forest, to showcase the work NEFF was doing in areas farther from dense population centers, such as the Pingree Forest Partnership in northern Maine. Tim Storrow, then Deputy Director of NEFF, made contact with Dick Perkins and the Proutys, and began a discussion with them about buying this land. The Proutys were agreeable, NEFF would be the ideal party to which to sell. The next step was raising the funds for this to be made a reality.

In order to give NEFF time to find a way to raise the money needed, the Proutys signed a purchase and sale agreement with NEFF, giving them exclusive rights to purchase for a limited period of time. The Prouty land had been appraised at the price of $3.23 million for commercial sale. The Prouty family agreed to a bargain sale of $2.65 million for the property. This was a win-win proposition: it decreased the cost to NEFF, and also gave the family tax relief on the income from the sale. However, in order to ensure the long-term stability of the project, further funds for an endowment were needed. The total cost including the endowment and transaction fees came to between $4.3 and $5 million. NEFF could not do this alone.

The Process of Fundraising

Major funding for the Prouty Woods Community Forest would come from the state of Massachusetts and the city of Littleton. The Massachusetts Executive Office of Environmental Affairs Division of Conservation Services administers the Self-Help Program. The Conservation Commision of cities and towns may apply for Self-Help funds to support the protection of open space. The grant selection process is a competitive one, in which projects are ranked for how they fulfill certain criteria, such as availablity to the general public, accessiblity to people with disabilities and also legal protection for land as permanently protected open space. From 50% to 70% of the project may be re-imbursed by the grant program, but matching funds are required from the municipality. The Conservation Commission of Littleton put in an application for $500,000 of Self-Help funds, which meant that an equal amount would need to be requested from the town itself. Toward this goal, NEFF approached the town to see if they would be willing to purchase a conservation easement on 85 acres of the Prouty Woods.

A Community Comes Together

On September 22, 2003, a special town meeting was held in Littleton to hold a vote on funding the conservation easement on Prouty Woods. This meeting was attended by more than 800 residents of the town. Many people were moved to attend out of love and respect for the memory of Donald Prouty, who had been a lifelong resident of Littleton. Donald held a special place in the heart of the town, having served as Town Moderator and Town Counsel, and was remembered with affection for driving townspeople and children across the Prouty Woods in his World War II issue jeep. Carey Prouty gave a moving address in support of NEFF, which was greeted with a standing ovation. A unanimous vote was given approving a grant of $500,000. With this support secured, a loan from the Pioneer Farm Credit bank was acquired to cover the cost for NEFF to purchase the land. A major fundraising effort was begun to pay this money back in 3 years time. Once again showing their generosity and dedication to the project the Proutys spearheaded the fundraising campaign with a lead gift of $500,000 given by Roger Prouty. Other individuals have given $645,000 towards the goal. The Town provided their $500,000, and the Commonwealth of Massachusetts approved a Self-Help grant, for $250,000, the largest amount awarded by the state in that year. At this time, $1.952 million has been raised, leaving $2.348 million still to be raised. The Prouty Woods are now the site of NEFF headquarters, and the town continues to benefit from this beautiful, open land.

Long Term Benefits to the Town

Now a permanently protected piece of open land in the center of the town, Prouty Woods Community Forest is a resource that all the citizens of Littleton may enjoy. Trails across the property cross fields and forests, bringing people from the vista on Wilderness Hill where they may view Mount Monadnock, down to a trail following the shore of Long Pond. The Conservation Restriction on the land ensures that the 1,600 feet of frontage on the lake will remain open and undeveloped along with the rest of 85 acres covered. Many civic groups make use of the property as well: a local gardening club holds their meetings there in exchange for attending to landscaping needs around the buildings, a local conservation group also may establish permanent office space in one of the barn buildings, and another local group is considering renovating the squash court in the same building for public use. NEFF is partnering with local groups in order to best utilize and maintain the Prouty Woods property, and to continue the relationship between the citizenry and the land they helped conserve.

The forests are being managed by NEFF according to their principles of sustainability and multiple use, balancing the valuable resources of wildlife habitat, water quality, recreational use, aesthetic and historical values, with sustainable forest management principles. The Prouty Woods will be a model forest for the many properties owned and protected by NEFF, serving as a key property helping in the conservation of thousands more acres of open land.