Almost two years ago, Laney Wilder and her husband bought a 19-acre wooded property in Brimfield, MA. When property hunting, they specifically looked for forested land with trails they could walk. They were also interested in finding land they could work to diversify and re-introduce native species.

A woman’s relationship with the natural world is often unique and meaningful. For women who own land, this connection can be rewarding and challenging. Women landowners engage with their woods in various ways, including enjoying the beauty of their property, caring for wildlife and nature, and appreciating the privacy that owning land offers. 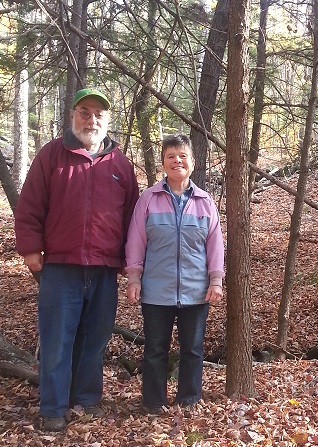 If you ever walk through Ben and Susie Feldman’s woods, you may wonder if you really just saw a gnome.  You did!  Susie strategically places gnomes throughout the woods.  Encouraging people to enjoy their woods is a passion for the Feldmans!

Wildlife management often ranks high as a management objective for landowners. Since more than 75% of the forests in Massachusetts are owned by families and individuals, the future of many of our wildlife species are in the hands of private landowners. In fact, most rare species and species in decline in Massachusetts are found on privately owned lands. In order to help these species survive, it is important to find ways to provide private landowners technical assistance and resources for important habitat work.

Support for forest conservation can come in many forms.  Animal tracking is one great way to engage people and communities while providing valuable information to inform land conservation and land use decisions.  Keystone Cooperator Janet Pesaturo is proof of that.

Janet has found herself on a track she didn’t expect, and she’s enjoying where it’s leading. Nine years ago Janet was a practicing psychiatrist, who made the decision to stop working in order to raise her two children, not realizing at that time where it would lead.