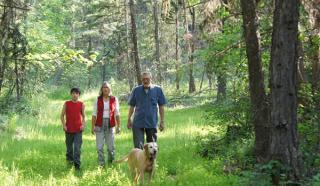 When developing the Forest Stewardship plan, David and the Committee included plans to conduct managed cuts of the Committee’s 133 acres of forests, since they primarily consisted of tall, slender, dense forests. Plans for increased trail cleaning and the creation of additional parking spaces were included as well. Though the forest management plan was completed too late in the season to begin work on the Forest Stewardship plan, David hopes to begin working on trail maintenance and the addition of 6-8 parking spaces in each of the existing parking lots in the meantime.

These simple projects have not been as easy for David to begin has he originally thought though. The creation of additional parking spaces is seen by the public as a sign that the protected acreage is becoming developed. David points out though that if there is so little parking that visitors are deterred from staying, overall use and thus attachment will decrease.

In addition to the Stewardship Program, David Killeen has also been very involved with Sherborn’s Town Forest Firewood Program, which is a volunteer based program founded by Town Forest Committee member, Robert Abos. The program harvests decaying trees for firewood and sells them to residents at below-market prices. These funds raised by the program had been allocated in the town’s general fund until last year, when the Committee requested they be placed in a revolving fund that could be used for forest management purposes. These funds have directly helped the Forest Stewardship Program move ahead with the plans to hire a consulting forester, since the Massachusetts Forest Stewardship Funds had not come in yet.

The Town Forest Committee is not the only organization within Sherborn to have a Forest Stewardship Program,. Sherborn’s Conservation Commission has also developed a plan with the help of their conservation agent, Bridget Graziano. David attributes much of the success of the Committee’s work with the Stewardship plan to Bridget’s previous work with the town. Some of her work includes public meetings, walk troughs, publishing articles in the local newspaper, selecting a forester to engage with the public, and being generally open to questions and comments.

To find a professional in your town, click here.