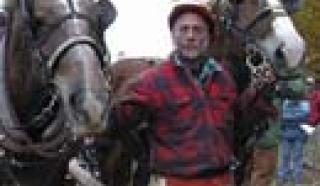 For an all-volunteer organization, the Hilltown Land Trust has a substantial list of accomplishments. Founded in 1986 by community members who were concerned about the potential loss of their open space, the trust has acquired 23 (soon to be 25) conservation restrictions, three agricultural preservation restrictions, and it owns six properties, all within the nine westernmost towns of Hampshire County. "We're not one of the big flashy land trusts," says one founding board member, "We're slow but steady."

While the organization is run by an energetic group of volunteers, it isn't a cost-free enterprise. Properties cost money to own and maintain, even if they are gifted to the trust.  In the interest of being good neighbors, HLT keeps several of its properties open to the public, and has built and maintains hiking trails for people's enjoyment, just one of the costs associated with land protection. More costly, however, is the purchase and management of conservation restrictions. Though restrictions are often donated to the trust by generous landowners, it is important for any land trust to have cash available in the event an important property becomes available and is vulnerable to development. Restrictions also need to be monitored annually, in order to ensure they are not being violated. Without full-time staff to carry out the fundraising, an organization like HLT can find itself rather challenged in its ability to fulfill the organization's mission.

Fortunately for the Hilltown Land Trust, an inspired and motivated board member developed a plan to raise money for the organization, support the local economy, and engage the public in their efforts all in one shot. Lincoln Fish, a forester well known in western Massachusetts, was one of the founding members of Hilltown Land Trust, and he has worked tirelessly for over two decades protect land in the HLT region. As soon as he walked the Stevens lot, a property acquired by HLT in 2004, Lincoln knew the trust had been given a great opportunity. "I walked out there," says Lincoln, "and saw some great quality cherries and oaks. This is a working forest," he continues, "HLT would like to keep the property as a real multi-value working forest where we have recreational interests that are really outstanding in addition to the potential timber and wildlife value." The property includes some public hiking trails, and Lincoln wondered if there was a way to get the public on board a plan to harvest some of those woods as a way to raise funds for the organization. "A lot of people use the trails here and really get to know them," explains Lincoln. "They would be upset if they got out here and saw that the woods around the trail had been harvested." At the same time, he saw the Stevens property had great timber potential and started to brainstorm a way to make a harvest a win win situation all around.

Along with the rest of the land trust, Lincoln launched a public education campaign to let people know about the benefits some responsible harvesting would bring to the organization, and thus the region. The plan stated that money earned through the harvest would be invested directly back into land protection efforts in the community, in the form of funds to cover the purchase of new conservation restrictions or property. To make the plan even more winning, Lincoln decided to team up with the Massachusetts Woodlands Coop (www.masswoodlands.org), a local cooperative that to seeks to help sustain local working forests and encourage green forestry practices, by having them mill and sell the value-added wood products.

In the interest of engaging the public in the project and gaining their support, Lincoln organized a field day out at the property for community members to come learn about the green forestry principles he intended to employ on the property. Not merely paying lip service to these principles, Lincoln hired local horse logger Kip Porter (pictured above) to do a substantial portion of the logging, leaving only the parts inaccessible to horses to mechanical skidders. Horse logging, which involves using Belgian draft horses, a sturdy lot, to drag the cut logs out of the woods, is much lower impact than traditional logging, which employs large tractor-like skidders to haul out the logs. It's an old-fashioned and slower method, but the results are impressive. And it's fun to watch. Lincoln asked Kip to do a demonstration of the technique for those that attended the Stevens property field day, so they could see exactly what sort of work was to be done on the land. "The public really got on board with this project," Lincoln said recently. "They saw that it is possible to have minimal impact on the forest, while raising money, and helping out local businesses at the same time."

HLT is also committed to providing excellent recreational opportunities for the public on their properties and, on the Stevens property, are equal opportunity land managers, timber not being the only value to be had from the woods. This summer, the trust will benefit from the labor of a group from the Student Conservation Association. This group of college students will spend part of their summer upgrading and building new trails on the Stevens property.

The Stevens property, a 267 acre parcel that was donated to the land trust in 2004 by Frank Stevens, is a unique piece of property. Though the impetus behind the harvest was to bring in new income that can be dedicated to additional land protection (Hilltown Land Trust netted about $15,000 from this first harvest), Lincoln has an appreciation for the land that goes beyond its timber value. On a walk through the property, he points out particular trees that are special to him-a large beech unaffected by beech bark disease, some stately oaks-and is pleased to find they weren't severely damaged in the great December 2008 ice storm. The boulders that hikers encounter along the trail are also impressive, and add some nice visual interest for those of us who like rocks of Sisyphusian proportions (the rocks are big enough that they're included on the trail map!).

That the property abuts Holyoke watershed land and several other properties under conservation restriction, creating a tract of thousands of acres of permanently undeveloped woods, makes this piece of land an important addition to a large habitat corridor. "There's really a lot of protected land out in this area," explains Lincoln, after reciting an exhaustive list of the different conservation properties that surround the Stevens tract.

As a forester, Lincoln sees the potential income for the land trust and is interested in finding a way to harness this income, responsibly, "greenly", and in a way that benefits the local economy.  Generating more income will give HLT the ability to do more conservation work. As Wil Hastings, enthusiastic president of the Hilltown Land Trust, put it, "Lincoln is positively lyric about the eco-forestry project on the Stevens property," and he ought to be. It's a model the land trust plans to continue to pursue, and one that would do well replicated across the region.