A Woman’s Perspective on Land 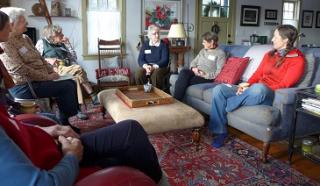 How do men and women’s roles and views of land differ? A recent landowner survey conducted by the Universities of Massachusetts, Maine, Cornell, and Vermont suggests that women play a unique and critical role in decisions about the land.  Preliminary findings from the survey suggest that women feel less confident than men in their understanding of how to move forward making decisions about the land. Importantly, the study also suggests that when women are confident in how to move forward, they are more likely to choose conservation than men.

So how do we help women become more confident with making decisions about their land? Two “Woodland Connections for Women” gatherings were recently held.  One was organized by the East Quabbin Land Trust and Mount Grace Land Conservation Trust.  The second was organized by the Franklin Land Trust.  Both were funded through UMass from MA DCR’s Working Forest Initiative.  The gatherings were an opportunity for women to get together to share stories, ask their questions, and enjoy each other’s company.  The goal of these gatherings was to provide women the opportunity to learn from each other and gain the information and resources necessary to feel confident and move forward with future plans for the land.

The feedback from participants of these gatherings is very positive! Evaluations show that the all-women nature of the event:

Comments from the evaluations included: